skip to main | skip to sidebar

Time to Get Serious -- The Orthodox Diet

I believe I have mentioned here before that if I just followed the fasting schedule for my faith, that there would be no weight problem. My husband and I are Serbian (Eastern) Orthodox, which is the same faith practiced by Orthodox people in Greece, Russia, Romania, Ukraine....you get the idea.
We have a LOT of fasting days. The calendar given to us by the church shows those days in red. Every month the days are different, and at Christmas and Easter the fasting period is 40 DAYS.
The rules get complicated (see www.abbamoses.com/fasting), but basically on fasting days you do not eat meat, eggs, dairy, or drink alcohol (I believe you are not supposed to have sex, either!). On the days in red with the notation "Strict Fast," in addition to not having meat, eggs, and dairy you also cannot have fish (except shellfish) and oil. The idea is also to eat small amounts.
So here is the September calendar.....Anyone interested in giving it a try with me? 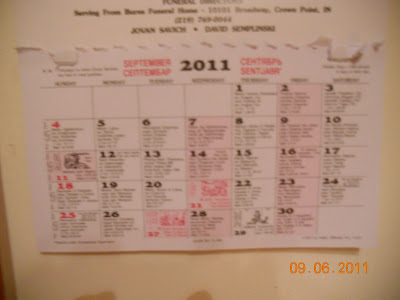 It is a lousy picture (sorry, I am not good with the camera). The strict fast days are the 11th and the 27th. Otherwise it is every Wednesday and Friday, plus the 11th and 27th.
I really think this will work.....I am going to give it a try.
Posted by John and Regina Zdravich at 8:55 AM 3 comments:

Feeling Fat and Depressed Because of a Friend

I am going to try not to make a long story even longer.
I have not posted here in quite a while. But something has happened that compels me to unburden myself. Something that really affected me.....
We went to visit friends this weekend. They used to live near us, but have moved.
My friend, because of some health issues, and determination, has lost a LOT of weight. She has been transformed.
I have been happy for her on one hand; she lost weight and looks great, but on the other, she has serious health issues (which are under control, by the way).
We were out and about, and someone said something about how hot it was outside, and I thought I heard her say something like, "Yes, I am hot." It was said in such a way that I realized she was not talking about the weather. But no one seemed to notice, and the moment passed.
Then later, we were at a festival, and she went to a vendor's booth to ask about something. After leaving the booth, she tells me, "I went up to ask that really cute young guy about the ____. He was really nice to me -- he was nice to me because I am hot. I AM hot. I am over 50 and I am HOT!" She raise her arms above her head and struck a pose. I did not know what to say or do. I just sort of kept walking and mumbled something.....
Now this sent me into a tailspin. I know it is not logical, and I know I am being irrational, but this REALLY messed me up.
My emotional side felt like she was saying to me, "...you are a FAT loser..."
My logical side tells me that she is just thrilled that she has lost weight. She is really enjoying her "new self" and is proud of the fact (deservedly so) that she has attained a slim figure. She has always been a big woman -- NOT obese, just tall and proportionally big. But I feel she has probably always wanted to be smaller, and has had issues because of her weight. So now she is smaller, and is ecstatic. And she has a right to be.
But still......to hear her say that to me.......I just cannot describe the effect it had on me. I immediately became depressed.
Later, we walked by a vendor's booth at the festival where sun dresses were being sold. We were all looking at them. Her husband looked at one and said, "This would look great on XXXX (his wife's name)." She heard him and said, "Yes, that WOULD look great on me."
I wanted to disappear into the pavement.
What is wrong with me???? I should have said to her, "yes, you ARE great looking! I am so happy for you!" or "You have done a FABULOUS job with yourself! Congratulations!" and "You would absolutely look great in that dress, or in anything you want to wear!"
But instead I felt/continue to feel inferior. I feel fat, frumpy, and old.
I was disappointed in her for her vanity, and what I felt to be conceitedness (if that is a word). I felt feelings of friendship slip away because it seemed to me she was "tooting her own horn" which is something I despise in people.
I am totally depressed. I MUST lose 15 pounds.
Posted by John and Regina Zdravich at 5:54 PM 6 comments:

We are not health care professionals (doctors, personal trainers, etc)We are not advice columnists.We are women seeking better health.This is our journey, these are our stories.