skip to main | skip to sidebar

Hay! I did it! I can move 107 lbs. hay bales around on my own by lifting them, not rolling, flipping or sliding them! The new hay is in 107 lbs bales, the old hay was in 130 lbs bales. The last couple loads of the old hay seemed light to me. They were easier to move. But, they weren’t lighter, I’m just stronger! Yay Me! I rock!

Now, to work on this whole 5k business...
Posted by Oregon Sunshine at 6:22 PM 9 comments:

Y'all Will Be Proud Of Me

It was in the frozen foods section at the mega mart. I needed more frozen fruits for smoothies.... You know where this is going, right? Yeah. The frozen fruit is directly across from the Ice Cream.

Heavenly, chocolate filled, nutted up, smooth, silky, sweet, cold, bits of frozen Heaven. It called my name... my eyes glazed over... Wrecking Crew was with me, and his wisdom of the moment was, "Mommy! ICE CREEEAAAAAMMMMMMMMM!" (No help there huh?)

When a wee bit of drool began to seep from the corner of my mouth, I decided it was time to move on--- with a quickness!

What stopped me from indulging in my fantasy? Ok- other than the fact that I'd get locked up for stripping down nekkid and ROLLING in the ice cream right there in the store.

It was Dear Husband.

The thought of him, at home, sugar levels going insane, pain levels insane, and knowing how much he loves ice cream.

I could not- just NOT NOT NOT- bring it into the house and eat it in front of him. My husband saved me from myself, with out even being there. Lawsy I love that man.

On the up side - I did indulge in a tiny package of Peanut M&M's. It wasn't ice cream by a long shot, but... it worked. Kinda.

Another upside?
My in waist band holster (for when I wish to carry concealed,) fit into my jeans much more comfortably today. Seems going back to work under horses and making my muffin top scream is wicked good for me!

Keepin' on keepin' on

I haven't posted an update in a while, so I thought I'd better get to it!

Things are going well here, for the most part. The last couple of months have been kinda stressful, with lots going on. I normally struggle with emotional eating (especially when faced with lots of stress) but I have been making a huge effort to really think before I eat.

I've been doing a decent job of bringing healthy meals and snacks to work, so that helps alot. I can resist the vending machine and the cafeteria, if I'm well prepared. It is little victories like this that help me along. I can feel positive momentum building, albeit slowly... :-) My biceps and quads are also starting to firm up from all of my workouts with my trainer. I just need to shed the layer of protective fat on top so I can display those muscles!

I would really like to buy a pair of beige breeches for summer riding - since the only ones I have are black! I don't want to cook while I'm out riding the trails and fields this summer. I need to get a few pounds off before I buy more breeches, but that is kind of what I am shooting for right now. I sometimes wear jeans to ride in, but I find that they bunch up and are kind of uncomfortable...

What do you guys ride in in the summer? Jeans? Breeches? Any other types of riding attire that is cool and comfortable?
Posted by Keebler at 10:33 AM 6 comments:

Not sure how it happened

I've been seriously neglecting my diet lately.
Diet as in the amount and types of foods I intake, not diet as in a particular food plan.
Anyhow, I've been eating whatever I want, whenever I want - even if it is something that I'm trying to limit. The stress of trying to get the house in order and working on the banking end of things (see here if you need to be caught up) made me totally ignore my 'healthy & mindful eating' goals.
And because I'm spending all my spare time cleaning/decluttering the house, running to appointments and the other little details that go along with trying to sell/buy property I have had VERY little pony time (which is making me cranky) and have had NO time to go to Curves (which surprisingly is also making me cranky lol) So it came as a complete and utter shock to me that I have lost 4 whole pounds!
Not sure how it happened but I'll take it! :)
Posted by cdncowgirl at 1:39 AM 3 comments: 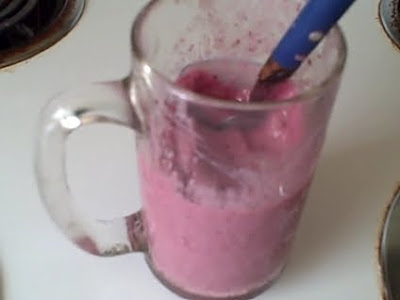 I totally forgot to fill you in on our latest "indulgence". No, it does not replace chocolate by any means, (in FACT right before I posted this, Cub shared not one, but TWO chocolate covered donuts with me... *bliss*) but this has been a great way to get some fruits into my youngest "fruit", the Wrecking Crew. Cub is no problem- he'll eat anything as long as it does not try to eat him first. Wrecker? Fagedaboutdit. Slap together one of these frozen babies though, and he sucks it down and looks for more.

Simple to make, (which is good because I have no brain power left lately to try anything complicated,) and good for us too, these smoothies rock.

All I do is a half dozen or so ice cubes, frozen sugar free fruits, a nanner, some yogurt, a splash of milk, and BAM- hit pulse and instant happy child. (Happy Mommy too for that matter.)

Anyone else have some simple summery treats to share?
Posted by Mrs. Mom at 11:13 AM 2 comments:

Today, I was supposed to run 5k at the Portland Race for the Roses. I've been training for months now. And while I've had set backs of illness and injury, I was really, really, really looking forward to it!

But... I didn't get to go run today. You see, Bad Pants had a work crisis. Lots of things were going wrong. First, his office scheduled an off-site hoorah get together sort of thing for this week, starting today. (Did I mention that today is also the day Doodle flies in for her very short spring break visitation and we haven't seen her in 7 months AND his vacation got cancelled at the last minute for this?) So, because BP had to be in downtown Portland and not at the finish line with the kids, I had to scratch the race. Instead, I kept my 10 yr old nephew overnight so his mom, whom I challenged to run with me, could run since BP was supposed to have him as well while we raced.

No, instead, I stayed home. BP went and did some big presentation that his former boss (who quit suddenly last week causing chaos) was supposed to do. Instead, I decided to be a good wife and support my husband and his quest to climb up the corporate ladder. Because, you see, more money equals more stuff to do here at the farm- which means more exercise or a personal trainer and riding lessons. Or something like that.

I've been disappointed since Monday. I've not made any effort to work out since last week. More, I haven't make any effort to run since hearing that the doc didn't want my partner to run due to her newness to exercise and recently achieving control over her diabetes in the past 6 weeks. I mean, if I wasn't running, what was the purpose of training? I'd have to walk the whole blasted thing to be a good person and stay with my teammate because I challenged her. That wasn't how this was supposed to go! So, instead, I let myself go.

After the race this morning, the visiting-racing fam brought down my race packet and freebie stuff I would have gotten if I had ran today. The cute hat says "Finisher 2010". Only I'm not a finisher. I'm not even a starter. I'm disappointed that I didn't run. I'm feeling guilty that I've let everything slide since I knew I wouldn't be running. I didn't do anything to earn the shirt or the hat or heck, even the chap stick. Yet, here I am with a ton of really awesome stuff I'd be so proud to have had I actually raced, walked, skipped, stumbled, something. I didn't do it.

I don't deserve it.
Posted by Oregon Sunshine at 3:51 PM 2 comments:

To help our wonderful Mrs. Mom not feel so bad about her picture from the other day, I thought I'd post a particularly bad one of me and Rusty. I think the angle is a bit funny, but either way, it is not a flattering shot of me. 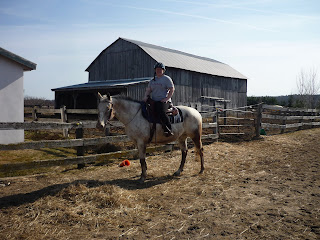 Even though I've actually lost a bit of weight recently, there is still a ways to go.

So, this afternoon will be spent looking at cookbooks and meal plans for ideas for healthy food throughout the week. Also, I will be planning out my exercise for the week. It will be written in my calendar and it will be done.
This extra weight? It's gotta go. It's been dragging me down for a while now.
Are you guys in with me?
Posted by Keebler at 7:46 AM 3 comments:

Ugh- I Saw A Picture of Me Today 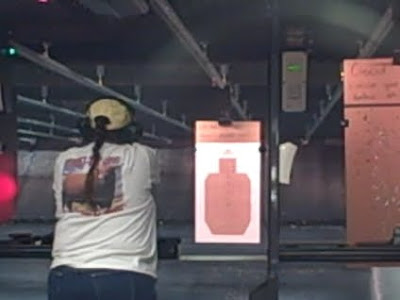 And I look like a COW. (NO, it is NOT just because of the bull on the back of my shirt either.)

This time of back recuperation? Has been Very Bad.

Time to get my arse back in gear, and to borrow a phrase from GunDiva-
LOOSE IT, BITCH!

What size saddle do ya'll ride in? I'm thinking of getting an all purpose saddle for Casey, but I have no idea what size I should get for myself. Also, since we're talking about sizing, how do I determine if he needs a standard or a wide tree? I realize a wider tree would probably be more comfortable for my rear as I prefer Hereford saddles to Circle Y, but I don't know a whole lot about English saddles as I've never had to buy one before. In this case, trying it on him before hand may not be an option as I may buy a saddle at a tack sale.

So, let's talk saddle sizing. What's most comfortable for you? Why?
Posted by Oregon Sunshine at 9:54 AM 9 comments:

We are not health care professionals (doctors, personal trainers, etc)We are not advice columnists.We are women seeking better health.This is our journey, these are our stories.